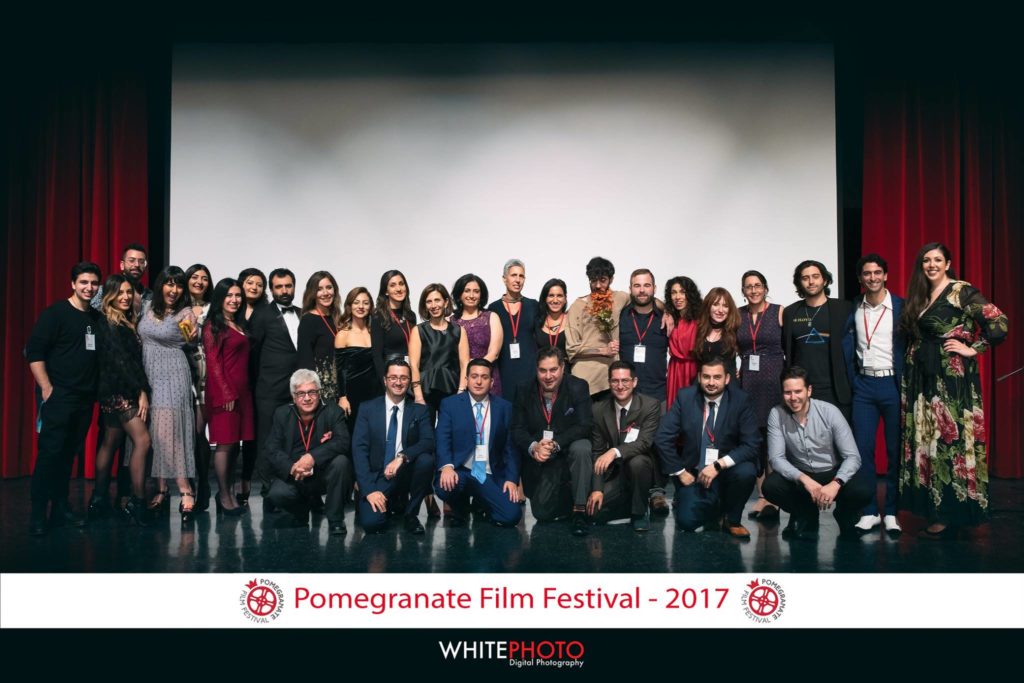 Toronto – Hamazkayin’s Pomegranate Film Festival concluded its festivities on Sunday, November 19th. The festival screened forty films from around the world over a five day period, leaving attendees with unforgettable memories. The winners of the film festival’s awards presented a diverse range of stories and experiences.

The Festival’s Highest Honour, The Golden POM Award, was handed out an unprecedented three times in 2017 to three deserving individuals who have devoted their careers to battling one of the principle themes at this year’s Festival, the issue of Genocide Denial.‎ Dean Cain, Atom Egoyan and Montel Williams were all feted for their lifetime achievements and humanitarian efforts advocating against Genocide Denial. Egoyan celebrated the 15th anniversary of his ground breaking feature film ARARAT, the first big budget motion picture about the Armenian Genocide and the ongoing denial which perpetuates Genocide. While attendees greeted Cain and Williams with a rousing and prolonged standing ovation for the Canadian Premiere of their edge-of-your-seat documentary ARCHITECTS OF DENIAL which links the events of 1915 in a clear and cogent pattern to the ongoing turmoil in Artsakh today.

Cain and Williams, both of whom are not of Armenian descent, are the Executive Producers of this fascinating documentary which created the greatest buzz in the Festival’s twelve year history. Both have been vocally touring North America shedding light on the message that “Genocide Ignored is Genocide Continued” and their inspirational address to the large crowd at the Festival left a profound effect on all those in attendance. Both ARARAT and ARCHITECTS OF DENIAL were presented on an exclusive out-of-competition basis.

The Best Short Film was awarded to MEDITERRANEA, directed by Nicolas Sarkissian from France. The film is about a young dancer who attempts to rescue a Syrian castaway and deals with the most pressing issue in Europe today.

Honourable Mention was given to CEMILE’S OBSESSION, directed by Deniz Ozden from Turkey. The story is about a Cemile, a Turkish grandmother who learns that a new family has moved in upstairs. Her curiosity is peaked after she brings them a plate of stuffed grape leaves to welcome them and discovers their background.
‎
Best Documentary Short was awarded to WAY BACK HOME, directed by Seda Grigoryan from Armenia. The film was an eye-opening examination into Arsinée Khanjian’s brave activism in Armenia.
ECHOES OF SURVIVAL, directed by Avo John Kambourian, received Honourable Mention in this category. The film is a highly engaging look into the lives of a group of well-known Armenian musicians from the American East Coast, featuring John Berberian and Mal Barsamian.

The prestigious Best Feature Film Award was bestowed upon LA VILLA by Robert ‎Guédiguian from France. POM was delighted to screen his latest masterpiece that was also welcomed at the Toronto International Film Festival earlier this year. ‎

Honourable Mention was given to THE LAST INHABITANT, directed by Jivan Avetisyan from Artsakh. The film received much acclaim at the Venice International Film Festival as it shows a poetic, humanistic depiction of the Artsakh conflict.

The Dr. Michael J. Hagopian Memorial Award for BEST DOCUMENTARY FILM went to INTENT TO DESTROY by award-winning director Joe Berlinger (USA). The film examined the experiences of the cast from the blockbuster film, THE PROMISE, while also grappling with Turkish denial efforts to suppress recognition of the Armenian Genocide.

The Audience Choice Award for Feature Film went to YEVA directed by Anahid Abad (Armenia/Iran). The film is a moving story of a woman who crosses from Iran to an Armenian village in order to protect her daughter. GYANK OU GRIV, known as THE LINE, directed by Mher Mkrtchyan from Armenia, was first runner-up. The dramatic feature is a beautiful exploration of love and friendship in the context of the Arstakh conflict.

INTENT TO DESTROY received the Audience Choice Award for documentary films. The Pomegranate Film Festival also presented two inaugural awards this year. The Garmir (Red) POM Award for Community Involvement was awarded to the Canadian punk rock band Billy Talent who participated in an informative panel following director Daniel Sarkissian’s documentary film, WHAT IS CLASSIC ROCK? Sarkissian himself was the first recipient of the Pomegranate Aril Award, which honours a rising talent in the film industry.

The Pomegranate Film Festival offered several exclusive, unforgettable memories that will be cherished for years to come. Beyond the mesmerizing appearance of Dean Cain and Montel Williams, Atom Egoyan and Arsinée Khanjian celebrated the 15th anniversary of their monumental film ARARAT together.

Singer Eileen Khatchadourian preceded the screening with a special song written for the 15th anniversary edition of the film. She was accompanied by composers and musicians Francesco Fabris and Sandro Mussida. Her concert was an exquisite mixture of traditional Armenian songs and rhythms of alternative rock. Actress Lara Arabian closed the festival with a glimpse of her new project, a play based on the life of the actress Siranoush. POM XII was indeed a five day celebration of artistic community and thought-provoking dialogue.