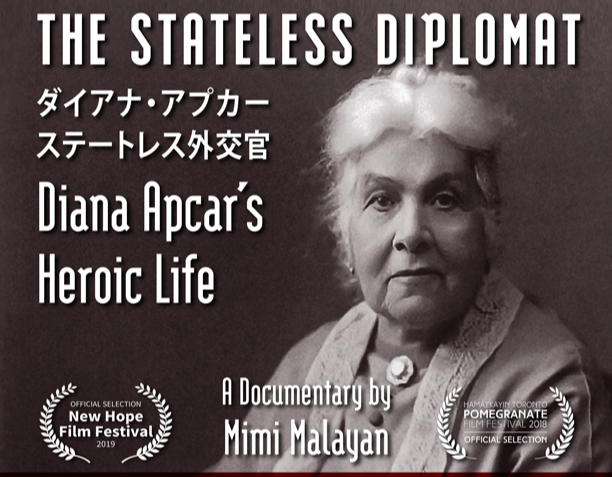 In order to commemorate Genocide Awareness Month this year we will be joining forces with the Center for Holocaust, Human Rights & Genocide Education (CHHANGE) for a special screening of THE STATELESS DIPLOMAT a fascinating docudrama about Diana Apcar, a humanitarian who was ahead of her time. 7pm eastern time this Thursday April 23rd. Directed by Mimi […]

Nearly 180 Saturday school students attended the Pomegranate Film Festival on Saturday morning for a special series of short films titled ‘Armenia Now.’ The afternoon was followed by a segment titled ‘ARMENIANS IN TURKEY: THEN & NOW’, including Garo Berberian’s TANIEL, based on the life of beloved martyr Taniel Varoujan, and ‘A SYMPHONY OF FILM,’ […]

Toronto – Hamazkayin’s Pomegranate Film Festival concluded its festivities on Sunday, November 19th. The festival screened forty films from around the world over a five day period, leaving attendees with unforgettable memories. The winners of the film festival’s awards presented a diverse range of stories and experiences. The Festival’s Highest Honour, The Golden POM Award, […]

Where to watch The Promise movie in Canada 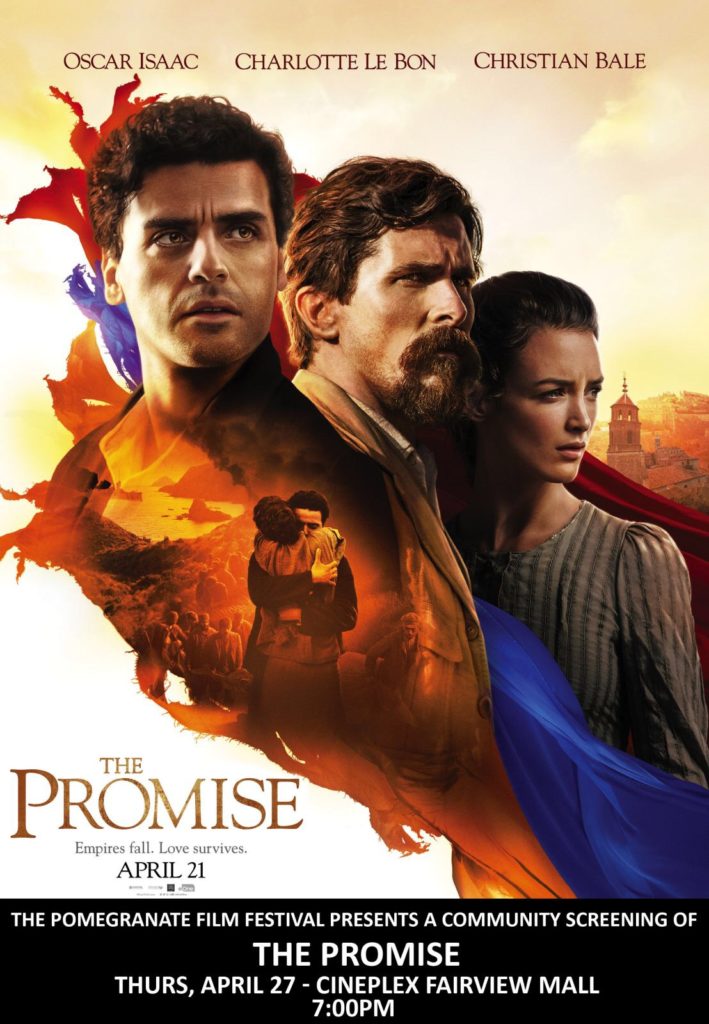 A special community screening of THE PROMISE

We encourage everyone to spread the word amongst friends, family, and colleagues to support this film. A special community screening of THE PROMISE. Thursday, April 27th @ Fairview Cineplex @ 7pm Tickets are $10 Tickets are SOLD OUT. Please check our Where to watch The Promise movie guide for screening dates and times. On behalf of […]

The 11th Annual Pomegranate Film Festival Celebrates Unprecedented Creative Collaboration and Talent from Around the World The Pomegranate Film Festival (POM) is delighted to announce its final 2016 schedule, to be held from November 16-20th in Toronto. POM XI will present thirty-eight films from fourteen countries around the world, showcasing different film genres and a […]

The Pomegranate Film Festival will take place between November 16-22, 2015 in Toronto. Celebrating its 10th anniversary, the Festival will present a week-long program showcasing Armenian culture and related issues. As 2015 marks the centennial of the Armenian Genocide, the film program will kick off with an opening ceremony titled “100 Years and We’re Still […]

Moskvitch, My Love One man’s nostalgic memories of Soviet times reveals the desire for belonging in this bittersweet comedy. 2- Interrupted Flight A tragic romance based on the true events of the flight from Yerevan to Sochi in 2006. A powerful follow up to director Yelena Arshakyan’s OUR VILLAGE, winner of both the Best Feature […] 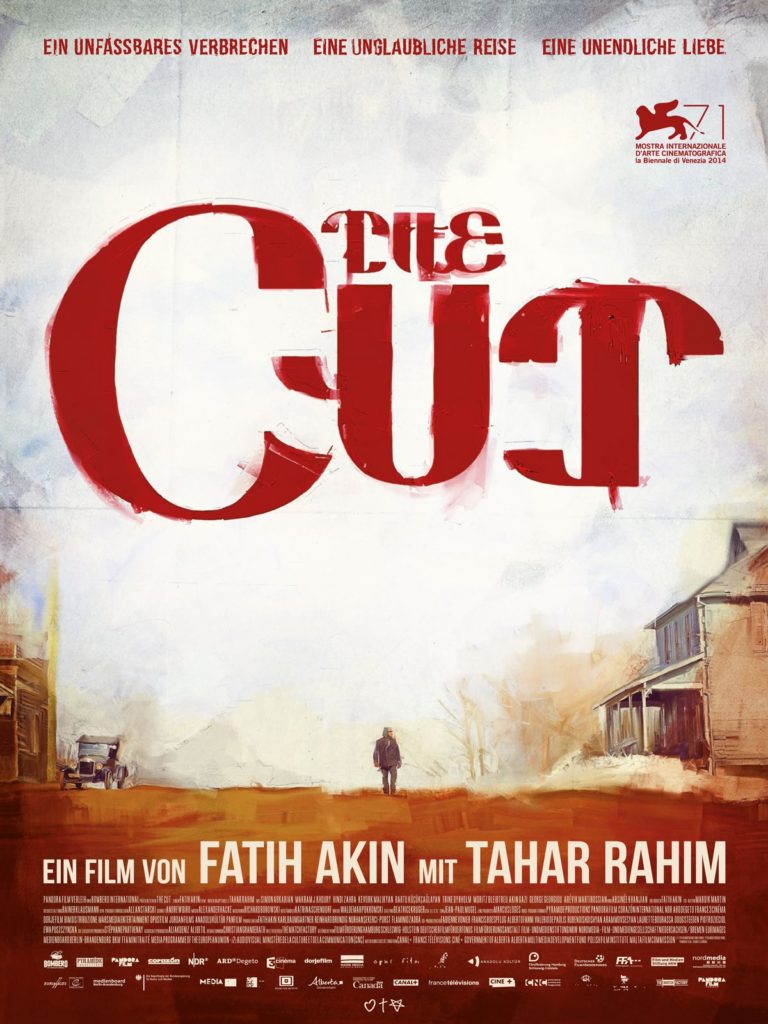 Hamazkayin’s Pomegranate Film Festival in collaboration with the Armenian Genocide Centennial Commemoration Committee of Canada,‎ will be screening the North American Premiere of the epic film THE CUT on Thursday April 16th @ 7pm at Cineplex Silver City Cinemas Fairview Mall. This special presentation will be the 3rd screening of this year’s POM 10×10 series […] 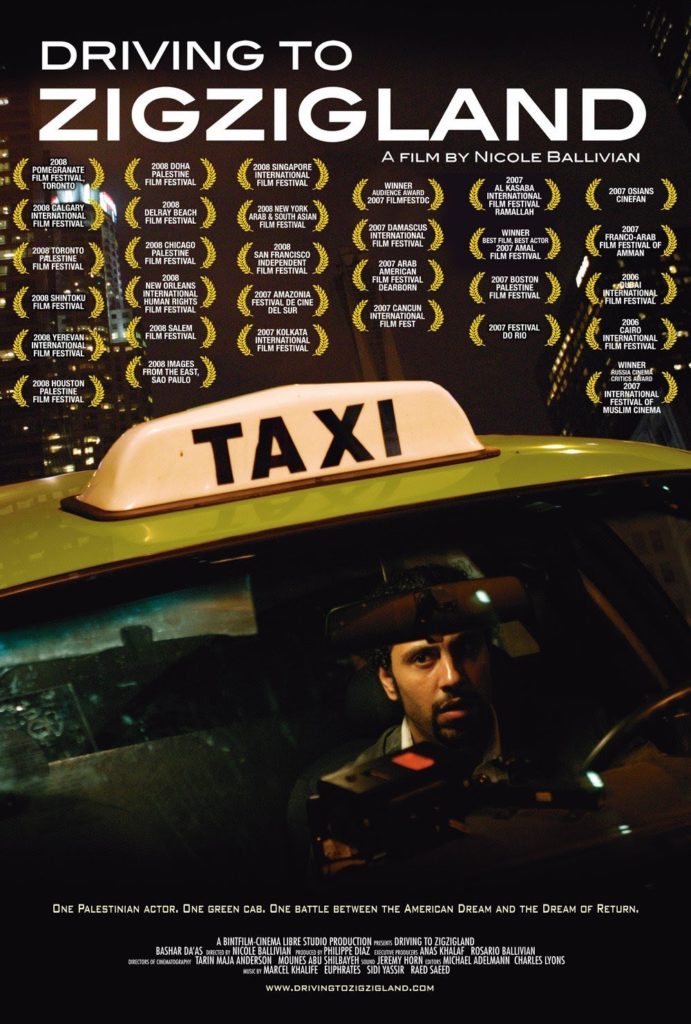 Be sure to catch the 2nd film in the POM10x10 series on Tuesday, March 31st at 7:30pm at the Hamazkayin Theatre, Armenian Youth Centre, 50 Hallcrown Place. Come join the countdown towards the 10th annual Pomegranate Film Festival scheduled for November 16-22, 2015. A US-Palestinian comedy filmed in LA and Ramallah in the central West […] 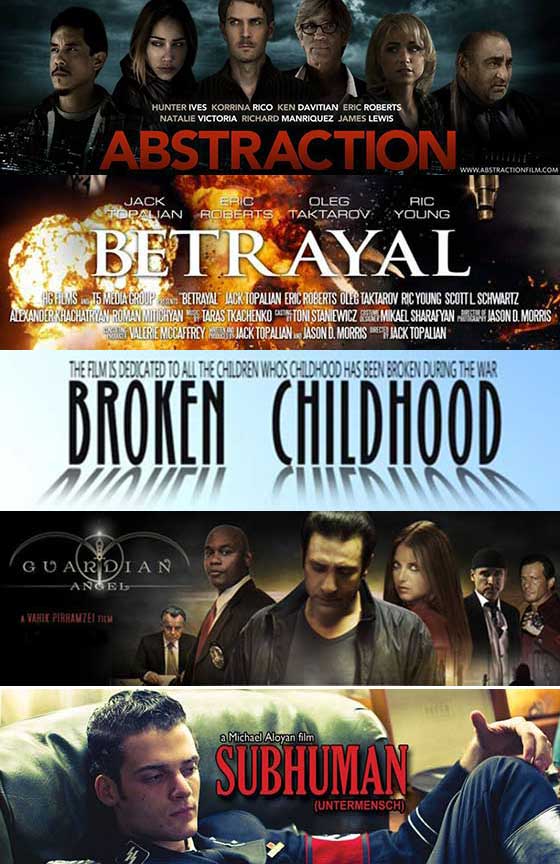 This year Pomegranate Film Festival becomes 8, and we are celebrating our 8th year with a a diverse array of amazing movies, From action to drama to comedy to documentaries, we will be posting our top picks for this years festival. Here is a list of our top 5 Action movies to watch at POM8, […] 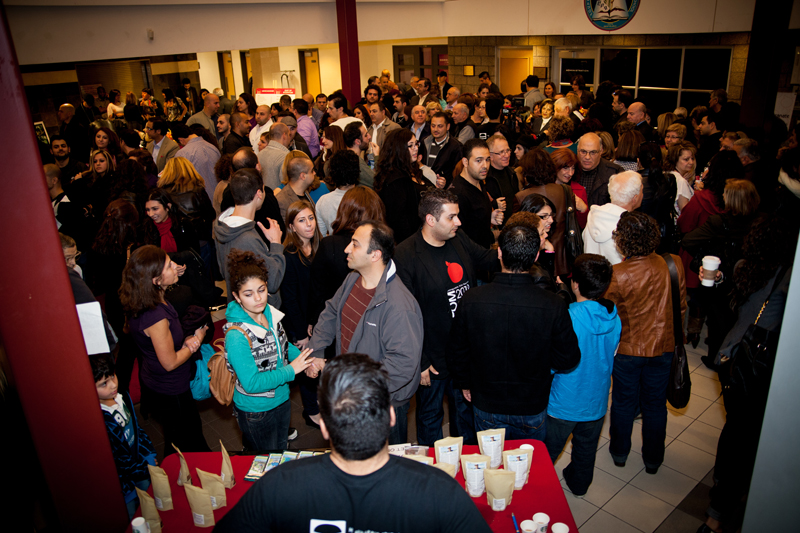 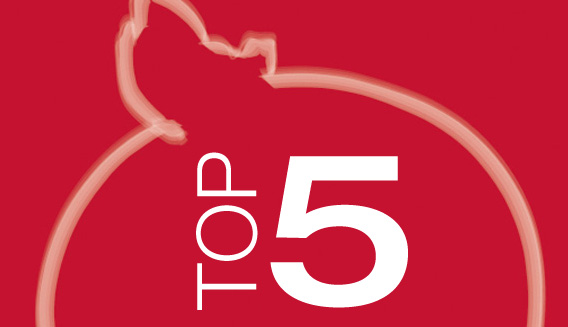 1- LOST & FOUND IN ARMENIA Lost & Found in Armenia is the story of Bill (Jamie Kennedy), an American tourist who vacations to Turkey to get his mind off a bad break up. In a comedic and dangerous turn of events, Bill unknowingly ends up in a small village in Armenia, where he is […]

Angela Sarafyan & Jamie Kennedy will get found at POM

We just got the confirmation that Angelan Sarafyan and Jamie Kennedy, stars of the Lost & Found In Armenia movie, which is directed by Gor Kirakosian will be present at the 7th Annual Pomegranate Film Festival in Toronto, October 18-21, 2012. We’ll post more details soon. To purchase tickets for LOST & FOUND IN ARMENIA please […]

text by LILIT BARSEGYAN With a heavy population of celebrities and filmmakers in Los Angeles, discovering an Armenian cinematographer on the east coast was rather refreshing. Embarking on a nostalgic endeavor last summer, Saro Varjabedian, a native New Yorker, decided to go location scouting on the other side of the globe to shoot his thesis […]

HERE Film set entirely in Armenia, HERE to premiere at Sundance in January 2011 Braden King’s romantic road-trip drama HERE, filmed in Armenia, was accepted into dramatic competition at The Sundance Film Festival where it will make its worldwide premiere in January 2011, with an anticipated screening at the Golden Apricot Film Festival in Yerevan […]